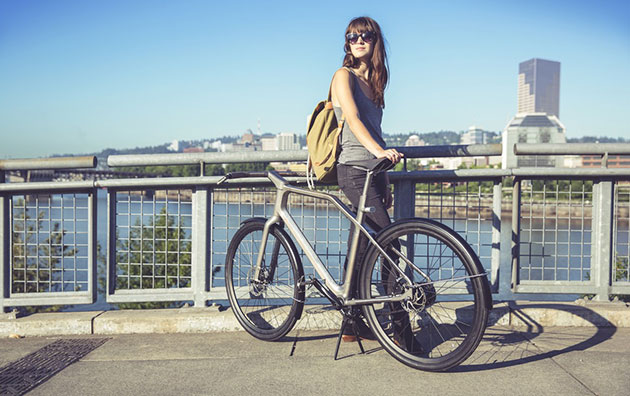 Just like when you’re driving a car, glancing down at your phone while biking the busy streets of your city can be quite dangerous. Thanks to a Portland-based design firm, there’s a bike that allows you to keep your eyes on the road while getting those much-needed directions. The folks at Industry teamed up with local builders Ti Cycles for Solid: a Bluetooth-enabled two-wheeler that connects to a smartphone app monitoring bike maintenance and offers vibrating handlebars for head’s up GPS navigation. A companion app, My Bike, keeps an eye on burned out lights and other potential upkeep headaches. My City, a second bit of software, serves as guide for blazing the bike lanes of your chosen locale.

In order to keep your eyes on the road, haptic grips will buzz when you’re approaching a turn and they’ll both vibrate when you’ve missed one. All of Solid’s on-board electronics are pedal powered with its components tucked inside a 3D-printed titanium frame that unscrews for easy access. Oh yeah, the gears are sorted electronically as well — at the push of a button — and those safety lights turn off thanks to built-in sensors. The silver-clad unit is the group’s entry into The Bike Design Project that’s matched designers in five cities against each other for a public vote on who’s made the best foot-powered option. 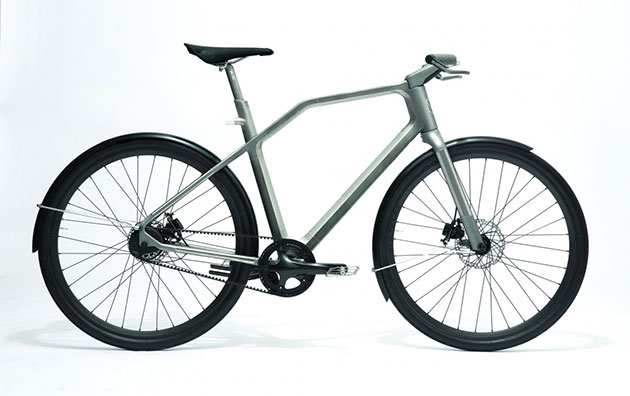 Artist Mike Stilkey uses the covers of books reclaimed from library trash heaps as a canvas for his whimsical paintings. He works with a mix of ink, colored pencil, paint and lacquer to create each artwork that can vary from anthropomorphic animals playing instruments to portraits of men and women inspired by Weimar-era German expressionism. Elements of his playful and at times emotionally exaggerated style have been compared to Edward Gorey and Egon Schiele.

The Los Angeles-based artist credits an immersion in skateboard culture during much of his youth as the beginning of his artistic career, as he simultaneously became exposed to graffiti and street art, though he received no formal training. His work has since been exhibited throughout the United States as well as internationally in galleries, museums, and libraries.

Stilkey most recently had a solo show at Gilman Contemporary in March, and had several pieces on view through BDX-LAX Faraway So Close, a cultural project that promotes contemporary art between sister cities Bordeaux and Los Angeles. You can learn more about his work in this three part video interview from Fully Booked (Part 2, Part 3), add see much more over on Facebook.

We’ve been looking at these a lot – like on and off all day. Take a look at these crazy cool gifs below…and you’ll see why we were hooked. There’s also some pretty cool info out there about creating stuff like this. Enjoy!

Freelance designer and stop-motion animator Micaël Reynaud (previously) creates animated GIFs unlike any we’ve seen. His process involves the use of video techniques like slit-scanning, time-lapse, and various forms of masking to create what he refers to as “hypnotic very short films.” Indeed many of these animations are pulled from fully realized videos which you can watch over on his Vimeo channel. Reynaud’s work has not gone unnoticed in the art world, the pigeon GIF above was a finalist in the first Saatchi Gallery Motion Photographycompetition, and he recently won the 2014 Giphoscope International Art GIF contest. You can scroll through dozens of his creations over on Google+. A packaging design can undeniably be one of the most fun projects if you’re a graphic designer. You get the freedom of working in a 3D space, you can explore challenging die cuts and bring a product to life with engaging graphics and visuals. I’ve noticed that through the years packaging designs have started carrying less and less visuals and complexities. What if we were to strip down the designs to its bare essentials and get rid of all the unnessesary clutter, that’s what Mehmet Gözetlik did.

These great designs were created by Mehmet Gözetlik, an Art Director and Co-Founder of Antrepo. He is a typography instructor at Işık University. After graduating from Hacettepe University Graphic Design Dpt., he got his MFA degree from Bilgi University. His works are featured in many international publications, books, magazines, galleries and web blogs; some of them were accepted into art museums’ permanent collections. In his collection below you can see simplified versions of Pringles,  Durex Condoms, Corn Flakes and many more.